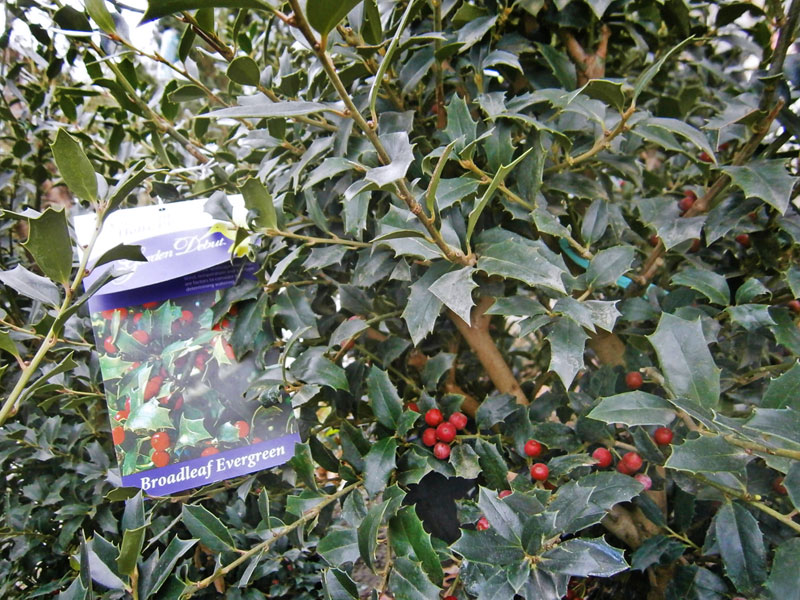 'Tis the season to buy hollies fa la la la laaa la la la laaaaaa! Hollies are starting to show off their winter berries and Christmas Jewel is one of our new favorites!

This holly is a new variety from Garden Debut, an evergreen shrub that reaches 10 feet tall and 6-8 feet wide at maturity. Christmas Jewel is a moderate grower with a naturally pyramidal, compact and upright growth habit. Grow it in full sun or a partially shady area.

These plants are easy to care for with very little pruning needed, but can be easily sheared into a hedge if desired. They are also nice when used in containers, as a screen or a specimen plant in the landscape. Another great thing about planting hollies of any kind, is that they are relatively pest and disease free. And yup, they're deer resistant.

Christmas Jewel of course has those classic holly shaped leaves- dark green and glossy, oblong with spiney sides and a point on the end. They're not super sharp spines however, unlike some of the more vicious holly varieties out there! Long lasting, large red berries appear in fall and winter. Don't worry about needing more than one or having a male or female to get berries. Christmas Jewel does not need a pollinator in order to produce the fruit.

Christmas Jewel is best known for its winter interest, but will surely become an anchor for your landscape. Come take a look at the beautiful hollies in stock now at The Garden Center and enjoy Christmas cheer year-round! 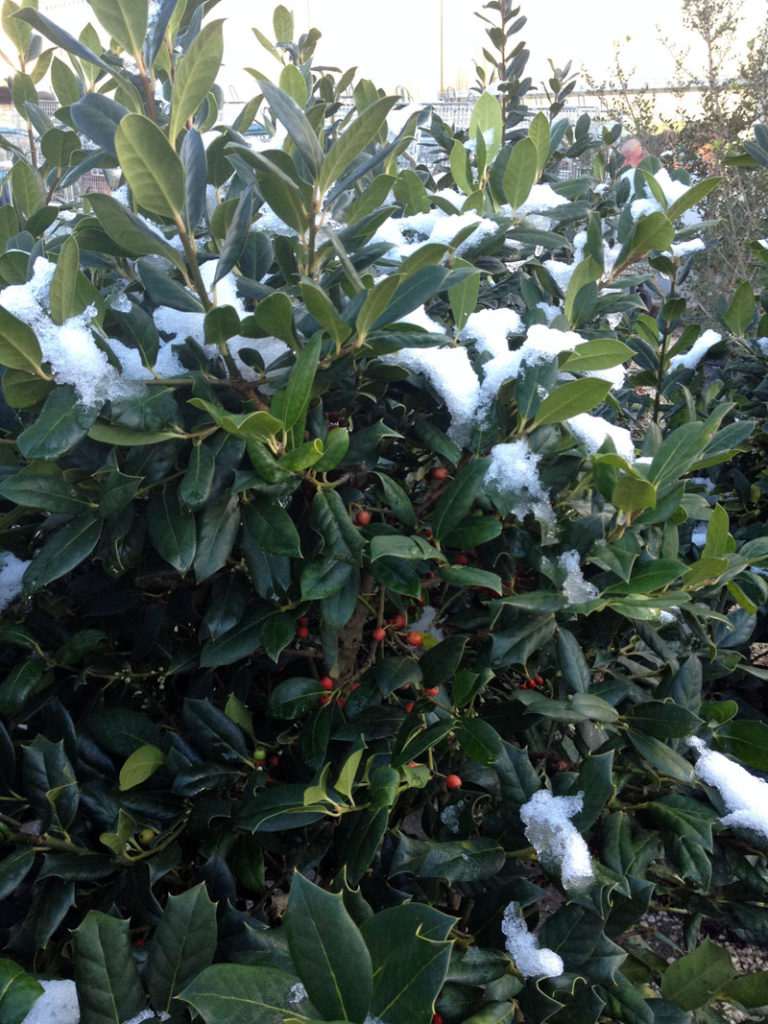 Nothing says December Plant of the Month like a good 'ol holly plant. Nellie R. Stevens is a favorite variety for many reasons, its most noteworthy being its showy red-orange berries!

What's in a Name?

Nellie R. Stevens is a hybrid between English holly and Chinese holly. The garden that the original hybrid plant was produced in belonged to Nellie Robinson Stevens, a teacher and avid gardener. "Miss Nellie" collected the seeds of the hybrid, hence the name.

Growth Habits and Use in the Landscape

A large evergreen shrub, Nellie Stevens forms a pyramidal shape with dense branching. The leaves are dark green and glossy, oblong and prickly, making them a good choice for security barriers. Deer don't care for the texture much either. Vigorous and fast growing, this holly can be used as a small tree, or planted in groups for screens or windbreaks. Give Nellie plenty of room, she grows to about 10 feet tall and 5 feet wide, sometimes larger.

Small white blooms will appear in spring. In fall you'll start to see large red-orange berries. This holly is one of the few that does not require a pollinator to set fruit. However, like fruit trees, it will produce even more berries if you are able to find a male Edward J. Stevens Holly.

Where to Put it?

Nellie R. Stevens hollies have pretty good heat tolerance and are drought tolerant once established. They prefer well drained soil and while rich acidic soil is a plus, it's not absolutely necessary for these hollies to grow. One of the great things about this variety is that it's low maintenance and keeps its shape even without pruning. If needed, prune in winter. Plant your Nellie R. Stevens holly in full sun to part shade and enjoy interest in your garden year-round!

November Plant of the Month

'Tis the season to plant holly fa la la la la la la la la! Okay, so it's not quite holiday time yet, but it's the perfect time of year to plant trees and shrubs. Especially if you're thinking about ways to add color to your winter landscape. Hollies not only offer beautiful, glossy green foliage when everyone else is asleep, many hollies produce colorful berries. Here's just one of the many varieties that we carry at The Garden Center.

Dwarf Chinese Holly has those hallmark spiny holly leaves and lots of them! Its very dense branching gives it a compact, rounded form. While it does produce berries, the foliage is so thick that you might not ever notice them!

This holly is excellent when used as a low hedge or barrier plant. It's perfect for those hard to fill landscape areas like corners. Plant a few together for a groundcover look. Plant it under windows where the spiny foliage could deter intruders. Since it's slow growing, you could even plant Dwarf Chinese holly in a container.

This plant is tough too! It can adapt to a wide range of soil types as long as it's got good drainage. While it prefers cool, moist soil, it is also very drought tolerant once it's established. Plant Dwarf Chinese Holly in full to part sun for the best results. Pruning will help to keep this plant neat and tidy, but won't need it often. Bonus: Dwarf Chinese Holly's thick, spiny leaves make it deer resistant.

Ready to plant one? The Garden Center has Dwarf Chinese Holly available right now! Pick up a three gallon container for $24.99. We also have plenty of other holly varieties to choose from. Don't forget that we are still having our 40% off sale until the end of November!

While our business is mostly outdoors and spacious, we ask that shoppers please observe the CDC ‘s social distancing guidelines and our in-store safety measures when visiting. We are cleaning several times a day and wiping down surfaces regularly. Masks are not required while shopping outside, but please bring one to wear at the checkout register and when interacting with staff. 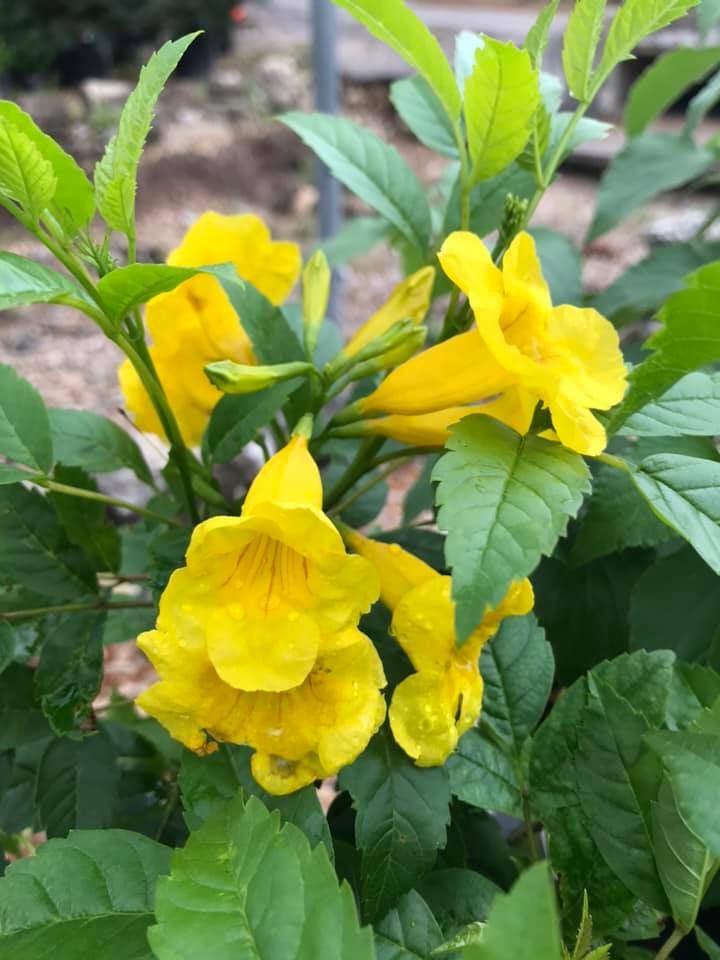